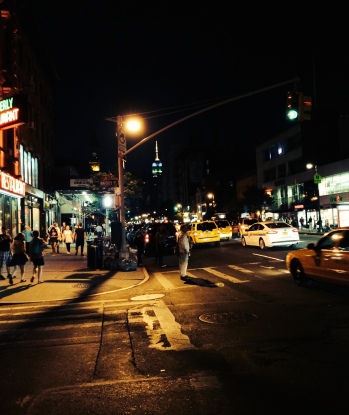 I guess I’ve never thought of myself as a real New Yorker. I was raised an hour north of Manhattan, and I had ample opportunities to visit the city for a variety of reasons. But, other than watching those twins crumble with the rest of my Midtown co-workers and finding unity inside the chaos, I never identified with the New York mentality, attitude, or aesthetic.

Los Angeles felt like home the moment I stepped foot on the Left Coast. I bathed in the energy and the crunchy, earthy attitude, and wrapped myself in the beachy progressiveness that permeates SoCal living. But, I never realized how important a role my Northeast concrete played in that foundation.

See, whether I knew it or not, New York pumped a lot of grit and grind into this blood and inside these bones. It made me street smart, tough, and able to see directly through the smog-sized fog of bullshit that hangs over this city like a storm cloud. I knew when people were lying to steal more fuel for their personal rockets, and I learned to never give the benefit of the doubt before it was earned. I gravitated toward a predominantly East Coast-rooted group of friends, and I’d bet that wasn’t due to freak coincidence.

But, having recently returned from my annual US Open pilgrimage, where I was able to take in the joys of family, unimpeded roads, and…rain, I have felt so far from that giant security blanket near the Hudson. Plane rides provide the illusion that we’re not on opposite sides of the country, but the brevity of travel can’t make up for the reality of miles.

I will adjust, as my history has shown. I will embrace all the benefits of evading fall and winter weather like a clever cat burglar sitting in the sun with his spoils. But, this renewed appreciation for my provenance will remain.

Thank you, New York, for mapping my route and filling my tires. Your infused weight has grounded me beneath this persistent charade.