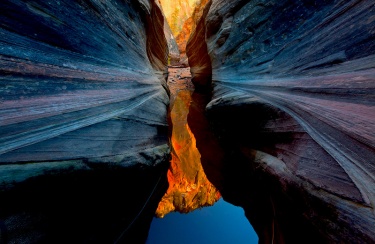 “Sometimes the world seems like a big hole. You spend all your life shouting down it and all you hear are echoes of some idiot yelling nonsense down a hole.”      -Adam Duritz

I double-checked the address. The flap was sealed without a crease. A Forever stamp was cleanly tucked into the corner.  I watched the mail carrier slide it into his satchel. An irrefutable delivery confirmation teased the idea of progress. So why am I left staring at empty inboxes? How can every call made to the universe go unanswered? Why should a desire to bring positive change be met with such opposition?

Recently, I was discussing the sensation of life in LA with some friends. I used the metaphor of a series of tall concrete walls. Placed strategically in a circle with just enough space between them to present the false illusion of freedom, the only way to escape the enclosure is to sprint, at full velocity, directly into the unbending slab. You crash, stand up, shake the dust from your shirt, and then speed head first into the next one. Being an isolated idea maker isn’t a job for the faint-hearted.

In your mind, you believe it’s tenacity and the will to succeed. You subscribe to all the theories that recommend attacking a problem from a unique angle, never doing things the same way and expecting a different result, keeping your nose to the grindstone, etc. There is an addictive false sense of forward momentum, simply because one foot is traveling in front of the other. But racing on the surface of quicksand will only bring you so far. Like dancing in the open jaw of an alligator, execution ultimately falls short of strategy.

So, is the answer to stop trying? Should you simply refuse to acknowledge the impetus to help others through your work? Do you chalk up years of tireless toil to one giant strikeout? After innumerable swings and countless misses, do you throw the bat to the ground, shake your head, and wave that white flag?