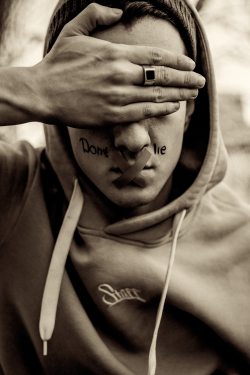 “Above all, don’t lie to yourself. The man who lies to himself and listens to his own lie comes to a point that he cannot distinguish the truth within him, or around him, and so loses all respect for himself and for others. And having no respect he ceases to love.”  —Fyodor Dostoevsky

A culture of cancellations and filters and the constant traversing of eggshell-laden paths has made for a gun-shy society terrified to whisper a word. But born from the mumbles trapped behind duct-taped mouths are the keys and strategies to bridge divides, lower the gates, and meet in the middle.

The more we are silenced, the more we stay silent.

A consistently suppressed people will lose the desire, inclination, and (eventually) the ability to question the status quo, speak truth to power, or identify expanding cracks in the concrete of a widely accepted and often forgotten foundation.

All muscles eventually atrophy from lack of use.

Protecting people’s feelings is a vitally important endeavor. No one should shuffle down the sidewalk wearing the weight of a thousand slurs, nursing bruises felt from a ceaseless barrage of barbs. But with every drawn line, there is an opportuity to cross. An ounce of prevention has now become a ton. But the cure still weighs a pound.

Constructing and fortifying a personal fortress is just as valuable as confiscating everyone else’s arrows. Perhaps we should shift focus and teach brick stacking or force field raising. Find a way to never feel hurt and you won’t.

I’ve always subscribed to the personal inventory formula. The only thing we have pure control over is ourselves and the way we react to the actions of the masses. So shining the light inside will eventually let the glow escape. It just needs to work its way around a few resistant walls.

Stand on that stage. Sit at that keyboard. Look into that camera. Pick up that pen. Turn on that microphone.

Tell a truth that is yours and let the cards drop and sit wherever they scatter. The world is far too fragile for this much fragility.

4 thoughts on “The Risk of Honesty”