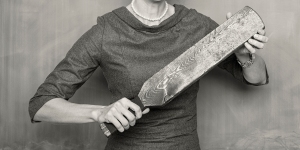 “There is a crack in everything. That’s how the light gets in.”  —LC

Leonard Cohen was right. But maybe that’s how the truth sneaks in as well. In an age of finger-pointing panic, saddling innocent necks with a concocted albatross feels like an exercise in sweaty futility.

Punching someone else in the mouth to alleviate your own toothache is psychotically pointless, and we are witnessing a disturbing cycle of dangerously misplaced condemnations in the form of false attributions.

Clean hands are too often tarnished and soiled by the stream of mud and muck spewed from the mouths of rabid believers desperate for vengeance. Idiots search for scapegoats in a world that has turned its back on their illogical ignorance, and they’re running out of easy targets.

Unforgivable violence as an outlet for the bottled frustration, isolation, and loss that have permeated the population is not going to stop the spread, clear the lungs, or bring back the dead. Sidewalk assaults, venomous threats, and racial slurs only fuel internal fires. So maybe it’s time to spin that mirror and explore some page-turning solutions—as opposed to bullet-spitting blame without scientific proof or justification.

The sneaky little secret that no one likes to share is that it’s not about race. It’s about disgusting food manufacturing and the ugly, unquenchable consumption of innocent, sentient beings. As long as we continue the barbaric practice of wet markets and turn a blind eye to the perilous commingling of humans and animals, we are at constant risk of viral outbreaks.

That’s a much longer discussion, best suited for another post.

But if we don’t take a drastic collective turn as a people and a planet, I recommend we start seeing this pandemic as simply one in a line, not one in a million.